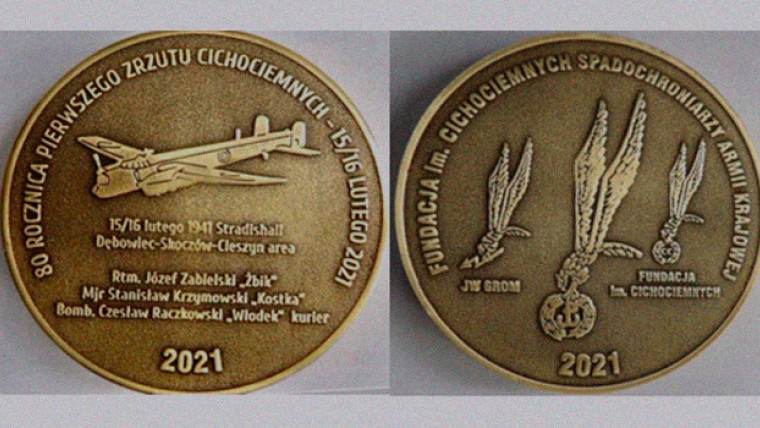 This year marks the 80th Anniversary of the first parachute drop by the Cichociemni  the “Silent and Unseen”,  the Polish Home Army Parachutists from the UK to occupied Poland.

Cichociemni, the Silent and Unseen, were elite special operations paratroopers of the Polish Army in exile, which was created in Great Britain during World War II. Their mission was to operate in occupied Poland. The drops to Poland took place from England and later on from Italy, between 16 February 1941 and 27 December 1944.

The first mission, Operation Adolphus, took off from Stradishall 15/16 February 1941 at 18.35  and returned to Stradishall at 06.05. The aircraft was flown by a crew of six; Captain and navigator Flight Lieutenant Keast, pilots Flying Officer McMurdie and Pilot Officer Baker, a W/T operator and a rear-gunner with a Corporal named Cameron acting as dispatcher and parachute attendant.

The agents on the flight were Lt Józef Zabielski, Maj Stanisław Krzymowski and courier Czesław Raczkowski. The aeroplane, a Whitley, took off intending to fly to a point between Częstochowa and Kraków. Due to heavy rain and cloud they had to continue using dead reckoning navigation techniques. Further issues arose and subsequently the actual place of arrival for the parachutists was Dębowiec, near Skoczów,  south-eastern Poland, 30 miles from the intended place.

This year, a special limited edition 80th Anniversary Commemorative Medal has been issued by the Foundation of the Cichociemni, the “Silent and Unseen” Polish Home Army Parachutists. In Warsaw a commemoration will take place Monday 15 February 2021 at the Cichociemni Memorial. In attendance: Warsaw Garrison Command, Special Forces JW GROM delegation, Council for War Veterans and Victims of Oppression. During the event Ewa Nowacka, a member of the Józef Zabielski family, will read a letter by Janusz Zabielski, son of Cichociemny Józef Zabielski.

At the beginning of the war was in the police force, Assistant Police Commissioner, soldier in the Polish Army, officer of the Polish Armed Forces and the National Army, Cavalry Captain, Cichociemni in the first team to be dropped in Poland.

A special parachute jump will be staged on Sunday 14 February 2021 in Poland. A group of parachutists on round parachutes will be jumping from one of two airports: Aeroklub Warsaw Babice or from Chrcynno which lies 45 kms north of Warsaw near the town of Nasielsk. A maximum of ten parachutists will be taking part to commemorate the 80th Anniversary first drop in Poland. Amongst the group will be some special forces GROM members. The drop will be subject to weather and wind conditions on the day.