The Polish Underground State in the Final Phase of the Second World War: X'1944 – VIII'1945 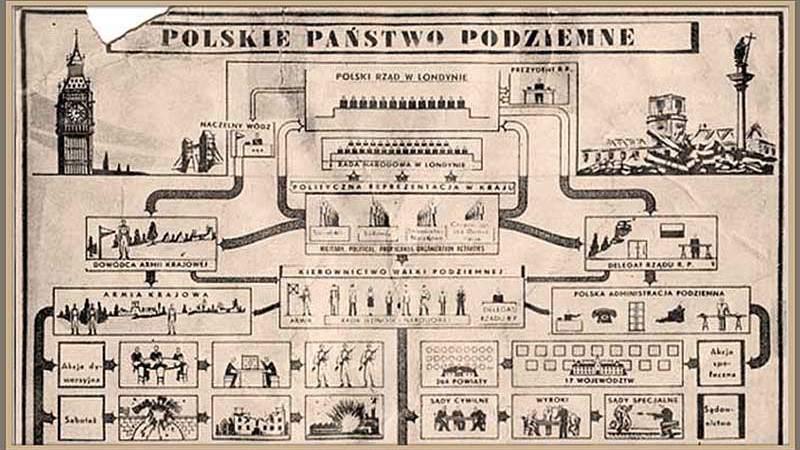 Prof. Wojciech Rojek - The Polish Underground State in the Final Phase of the Second World War

The Polish Underground State(Polskie Panstwo Podziemne – PPP) took on its final form in the spring of 1944, when on May 3rd – on the basis of the President of Poland’s decree concerning the Polish Republic’s interim government in occupied Poland – when the National Council of Ministers (Krajowa Rada Ministrow – KRM), at the head of which stood Jan Stanislaw Jankowski (“Sobol“–“Sable”) was called into being.

Already in existence at that time were: the Home Army (Armia Krajowa – AK) under the command of Gen Tadeusz “Bor” (”Forest”) Komorowski, as well as the Council of National Unity (Rada Jednosci Narodowej – RJN), headed by Kazimierz Puzak the veteran socialist (“Bazyli”), officially founded on 9th January 1944 though in actual fact converted from the National Political Representation (Krajowa Reprezentacja Polityczna) in March 1944. The KRM was the counterpart to the Polish Government-in-Exile in London; the RJN was the homeland equivalent of the parliament, and the AK represented the Polish Army in the occupied homeland.

Theperiod under consideration herebegan with the Polish-German understanding reached on 2nd October for a “ceasefire in Warsaw” which effectively ended the Warsaw Rising. During the fighting some 10,000 Polish insurgents from the AK and other military organizations were killed, some 7,000 were reported missing and another 5,000 were seriously wounded. In addition to this, over 150,000 civilians perished. On top of that, deliberate German actions during the Rising and after led to the destruction of approximately 70% of the Polish capital’s property. By October 5th the Polish insurgent forces, which shortly before the capitulation were reorganised to become the AK Warsaw Corps (the Romuald Traugutt 8th Infantry Division, the Stefan Okrzeja 10th Infantry Division and the Maciej Rataj 28th Infantry Division), abandoned their positions and became prisoners of war. The civilians, via a transit camp in Pruszkow, were sent either to Germany to do forced labour (c. 165,000) or resettled somewhere in the General-Gouvernement (c. 350,000), whereas younger civilians were sent to either labour or concentration camps

The collapse of the uprising caused a temporary problem with the AK’s command structure. However, already in October the Chief Command was reactivated by Gen. Leopold Okulicki (“Niedzwiadek” – “Bear Cub”), who in that month replaced Gen. Komorowski as GOC-in-C of the Home Army. In the meantime Soviet persecution of Home Army soldiers continued. It is estimated that in the period from the summer to December 1944 approximately 30,000 Home Army members were arrested in the territories of the so-called “Lublin Poland”. It was with this state of affairs that on 19th January 1945 Gen. Okulicki ordered the AK’s dissolution. Nonetheless, a large part of the Home Army remained active as its members feared various forms of repression and thus there were frequent armed operations against the communist authorities, particularly against their repressive security forces and associated Polish Workers’ Party (PPR) organisations.

Asmentioned earlier,representingthe Polish Government-in-Exile in occupied Poland was the clandestine Government Delegature, which in May 1944 was renamed the National Council of Ministers (KRM). It was headed by Government Delegate Jan Stanislaw Jankowski. The Delegature was divided into departments corresponding to ministries of the Government-in-Exile. It should be remembered that already in 1942 there was also a New Lands Office, which documented Poland’s rights to German-held lands in the west and north and prepared plans to take them over. Moreover, there existed a provincial (wojewodztwo) and local (powiat) network of government delegatures.

After the fall of the Warsaw Rising, the vice premier and the delegate ministers continued their clandestine work outside the capital in Krakow and Piotrkow Trybunalski. After the Red Army’s January offensive, the NKVD – under the pretext of wishing to start negotiations – persuaded the leaders of the Polish Secret State (including members of the KRM) to come out of hiding. They were arrested on 27th March in Pruszkow and just the following day sent to Moscow. A trial was held that same year and, on the basis of false evidence, they received prison sentences. Meanwhile, in April 1945, those members of the Polish Secret State who remained free decided not to reactivate the KRM. Almost at the same time, on April 11th, Prime Minister Tomasz Arciszewski granted the head of the homeland Department of Internal Affairs Stefan Korbonski full authority to run the Government Delegature.

On 15th August 1944, during the Warsaw Rising, the RJN issued an “Appeal to the Polish Nation”, in which it predicted far-reaching economic and social transformations in Poland. On 22nd February it protested against the decisions made by the world powers on Poland’s behalf at Yalta, however declaring at the same time its readiness to participate in the forming of a provisional government of national unity. After the Pruszkow arrests, sometime between the end of March and beginning of May 1945, a reduced RJN was reformed. 28th June 1945 marked an important turning point in the history of the Polish Secret State as this was when the communists transformed the Provisional Government of the Polish Republic (which had succeeded the Polish Committee of National Liberation) into the Provisional Government of National Unity – whose vice-premier, incidentally, became Stanislaw Mikolajczyk.

This measure coincided with a crisiswithin the government of the Polish Secret State, for already at the start of May 1945 the Peoples’ (Peasant) Movement (SL) had called for the Delegatures dissolution and the creation of another centre of administration. At the same time, it gave its vote of no confidence to Prime Minister Arciszewski’s government in London. The Latter’s mediation did not bring any positive results, as a consequence of which, at a meeting held on 27th June, Agrarian Party member Korbonski officially submitted his resignation to the meeting’s chairman, Jerzy Braun. After further consultations, the RJN and Government Delegature reached the decision of self-dissolution.  This formally happened on 1st June 1945, when the RJN issued two important documents: “A Manifesto to the Polish People and the United Nations” (Manifest do Narodu Polskiego oraz Narodow Zjednoczonych) as well as “Fighting Poland’s Testament” (Testament Polski Walczacej). The first recapitulated Poland’s war objectives as well as her policies towards the USSR. The second outlined a programme for the future withdrawal of Soviet troops, stopping the persecution of Polish Home Army soldiers and officials as well as the introduction of a democratic system of government. Moreover, it stressed the necessity of carrying out economic and social reforms in Poland.

Meanwhile, that same springa new army formation came into being. Code-named “Nie” (Niepodleglosc – Independence), its objective was to continue Poland’s struggle for freedom on territories occupied by the Red Army and now officially controlled by a communist government. The successive commanders were: March – July 1944 Col . Emil Fildorf (“Nil” – “Nile”); July 1944 – January 1945 Gen. Okulicki; March – May 1945 Col. Jan Rzepecki (“Prezes” – “Chairman”). This new army was to take over the cadre as well as the financial and technical resources from the disbanded AK. However, Operation Tempest (Burza) and the Warsaw Rising seriously hampered the creation of the new army’s structures. When the AK disbanded, Army Nie units began operating independently in Central Poland (under Col. Jan Mazurkiewicz “Radoslaw”), Western Poland (Lt. Col. Jan Szczurek-Cergowski “Debor”) and Southern Poland (under Commander NN). Their activities comprised intelligence gathering and propaganda. In May 1945, on a request submitted by Col. Rzepecki and being convinced that the organisation had to a large extent been uncovered, the acting C-in-C Polish Armed Forces, gen. Wladysław Anders disbanded Army NIE.

Between the end of March and beginning of April Col. Rzepecki (“Ozog”) set about forming a new nationwide organisation as Commander of the Homeland Armed Forces Delegature (DSZ). On May 7th Gen. Anders endorsed this action. The new organisation’s basic aims were: to consolidate the underground army, keep the Government-in-Exile informed about the situation in Poland as well as to protect the people and clandestine structures from Soviet and Polish communist security forces. Moreover, it was to spread patriotic and anti-Soviet propaganda among the Polish People’s Army (LWP) soldiers, keep open all possible channels of communication with the London based government (so as to be able to transfer not only correspondence and materials but also people) and finally to support the political opposition in Poland headed by Mikolajczyk.

Col. Rzepecki became the Armed Forces Delegate. His powers were comparable to those previously held by the AK commanders. Politically he was answerable to the Delegate of the Government of the Polish Republic-in-Exile. The DSZ took over NIE’s army personnel and material resources. Organisationally it was divided into three zones: Central Poland (commanded by Col. Mazurkiewicz and including the districts of Bialystok, Kielce, Lublin, Łodz and Warsaw), Southern Poland (commanded by Col. Antoni Sanojca “Cis” (“Yew”) and including the districts of Krakow-Rzeszow as well as Upper and Lower Silesia) and Western Poland (commanded by Lt. Col. Szczurek-Cergowski and including the districts of Bydgoszcz, Poznan, Szczecin, Gdansk and Olsztyn). The DSZ HQ generally assumed that an all out armed struggle no longer made any sense, but it did allow for acts of self-defence against individual acts of terror. It also used propaganda, including the publication of periodicals such as Polska i Swiat (Poland and the World) and Mysl Niepodlegla (Independent Thought). In the face of reprisals (in the form of pacifications carried out by the NKVD as well as by the LWP supported by the Public Security Office, which in January 1945 became the Ministry of Public Security), the DSZ also appealed for local secret army units to limit their military activities, but this appeal remained by and large unheeded.

Meanwhile both the NKVD and the Polish Workers Party newly created security forces began a ruthless campaign to wipe out the patriotic resistance movement. The first stage of this campaign involved the breaking up of AK detachments and civilian units of state administration that had come out into the open during Operation Tempest. AK members were held in former German camps and prisons, including Majdanek, Lublin Castle, Nowinki, Krzesimow or Trzebuska. In many cases, especially with regard to officers, AK members were deported to the USSR. On territories lying beyond the Curzon Line there were cases of mass reprisals against people on the principle of collective responsibility, the murder of wounded captives and shooting of POWs. In this situation, AK units, especially those in the northern and eastern marches of pre-war Poland, paid no regard to their predicament, took up arms and fought back

Ongoing political changes as well as a growing belief that a conversion of the military organisation into a civilian one was now essential resulted in the disbanding of the DSZ on 5th August 1945. It was as a consequence of this that on 2nd September 1945 the “Freedom and Independence” Union (proper title: “Freedom and Independence” Resistance Movement without War and Diversions) was founded. The new organisation took over most of the DSZ’s cadre, organisational structures and material resources, while its first HQ Chairman, in the period from September to November 1945, was Col. Rzepecki.